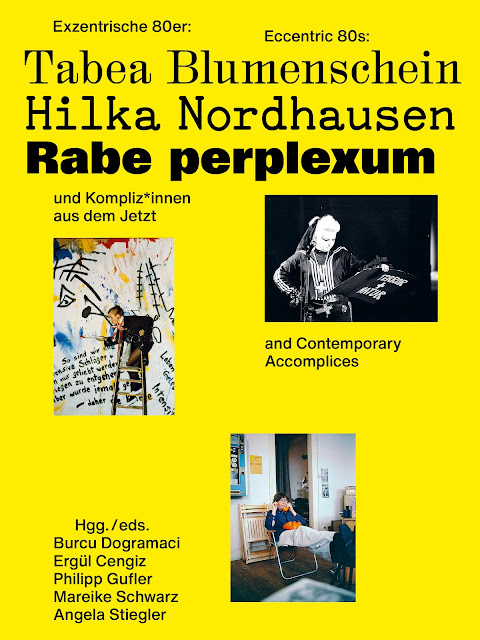 Tabea Blumenschein (1952–2020), Hilka Nordhausen(1949–1993), and Rabe perplexum (1956–1996) were eccentric artists of the eighties – they deviated from norms and operated outside of the centre in subcultural milieus. They worked in friendly constellations in the cities of Berlin, Hamburg, and Munich. Blumenschein, Nordhausen, and perplexum represented images of gender and identity that weren’t recognized at the time and lived their sexual orientations in a non-conformist manner. The artistic work of the eccentrics was formulated in performances, readings, films, concerts, or murals – in collaborative and often ephemeral forms. For the first time, they are now brought together in one book and discussed contextually.

Their lives and works are activated by contemporary artists Ergül Cengiz(*1975) (3 Hamburger Frauen), Philipp Gufler (*1989), and Angela Stiegler(*1987) in a series of images and texts. Art theoretical and philosophical texts as well as voices of contemporaries provide insights into the diverse scenes of the eighties and reflect them for today.

The book is published by b_books in the context of the exhibition“Eccentric 80s”, which will be seen in Munich, Berlin, and Hamburg: