This week at San Serriffe: exhibition QUILT #01—#30 by Philipp Gufler 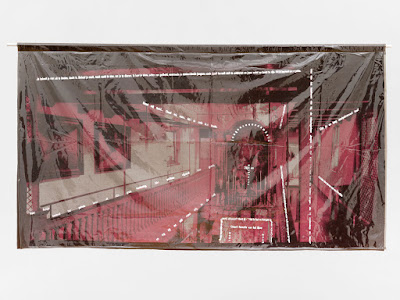 The artists’ book ‘Quilt #01 — #30’ presents an ongoing series of quilts –silkscreen printed fabrics– produced since 2013 by Philipp Gufler. By combining text and image, Philipp Gufler's series of works refer to artists, writers, LGBTIQ+ magazines and lost queer spaces, which are often omitted from the history books. The subjects that are central to Gufler’s quilts are closely related to his own artistic practice and interests, but also his personal life. For the occasion of this book presentation, three quilts by Gufler will be on display at San Serriffe.

"Questioning heteronormative gender roles and gender identity is a thread that runs throughout Gufler’s practice as well as through the series of quilts, for example in Quilt #19, dedicated to Kirsten Nilsson (1931–2017). Born Karl Erick Böttcher in Brandenburg, they worked as a barber and costumier before finding their calling as a ‘female impersonator’ in drag bars in Munich, Berlin and Hamburg. In 1964 Nilsson underwent gender reassignment surgery in Casablanca, Morocco. The operation was extremely risky at the time and patients had to sign an agreement that if they did not survive their body would be cremated and their ashes would be scattered at sea.“ (Quote by Laurie Cluitmans, curator of contemporary art at the Centraal Museum in Utrecht, from Quilt #01 — #30)

From 1957 to 1963 Dutch writer Gerard Reve lived in the Oudezijds Achterburgwal 55 in Amsterdam and often visited the hidden catholic church Ons’ Lieve Heer op Solder. The texts on Quilt #30 (Gerard Reve) from 2019 are referring to his novels Nader tot U from 1966 and Lieve jongens from 1973.

Quilt #24 (C.) is referring to a character from Guflers artist book ‘Indirect Contact’. In the publication historic figures and contemporaries of Gufler meet outside the boundaries of chronological order. He gives them an indirect voice in the form of appropriated fragments. The persona that links all 21 chapters is Jäcki, based on the protagonist from Hubert Fichte’s novels. Like Fichte, Gufler makes use of the character Jäcki as a screen as well as ambivalent Doppelgänger (who never fully becomes the alter ego). Rather than an identity produced through fixed ways of being, Jäcki explores the self through the constant destabilization of his own identity.

Philipp Gufler works spans various media including silkscreen prints on fabric and mirrors, artist books, performances and video installations. For the video installation ‘Projection on the Crisis (Gauweilereien in Munich)’ (2014) he began researching into the self-organized archive Forum Queeres Archiv München, of which Gufler has since become an active member. Philipp Gufler studied at the Academy of Fine Arts in Munich and attended artist residencies De Ateliers, Amsterdam (2015-2017) and Skowhegan School of Painting & Sculpture, Maine, USA (2019). He published the artist books ‘Projektion auf die Krise’ (2014), ‘I Wanna Give You Devotion’ (2017), ‘Quilt #01-#30’ (2020) and ‘Lana Kaiser’ (2020) with Hammann Von Mier Verlag, Munich and ‘Indirect Contact’ (2017) with BQ, Berlin.

The publication „Quilt #01–#30“ was published by Hammann von Mier Verlag with the kind support by Centraal Museum Utrecht, LfA Förderbank Bayern, Mondriaan Fund, the public fund for visual art and cultural heritage, Stichting Stokroos and the galleries BQ, Berlin and Françoise Heitsch, Munich. San Serriffe wants to thank gallery BQ for the loan of the works on display. 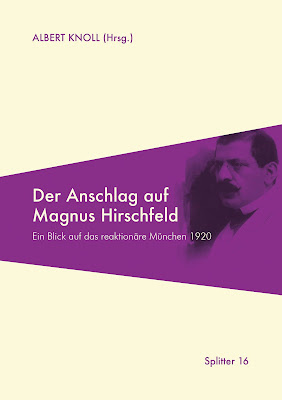 The Attack on Magnus Hirschfeld. A look at reactionary Munich in 1920 [in German]

The Berlin based doctor and sexologist Magnus Hirschfeld (1868–1935) was a pioneer of the gay movement. With the founding of the Wissenschaftlich-humanitären Komitees (Scientific-Humanitarian Committee) in 1897 and the Institut für Sexualwissenschaft (Institut for Sexology) in 1919 he set a precedent for sexual education work. One of his numerous lecture tours took him to Munich on October 4th, 1920. After the event, a group of reactionaries brutally beat him up.

Albert Knoll. Erwin In het Panhuis, Philipp Gufler and Ralf Dose shed light on Hirschfeld’s activities, the events in Munich and its background. 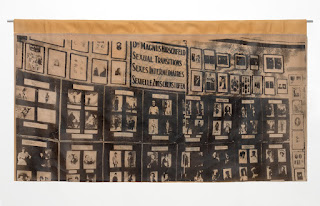