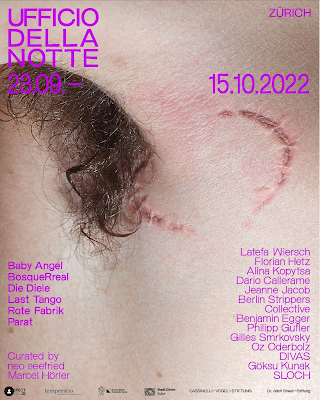 23. Sept - 15. Oct 2022
Opening: Friday, 23. Sept 18:00-21:00
Pleasure – the sharing of joy – affects and connects people. Although certain practices, especially those that conform to non-normative, queer, non-monogamous and non-binary lives, have always been marginalised, criminalised or at least ignored by the institutions of power. Nevertheless the figures of the night have broken the limits of society’s decency. What still remains are questions: Where and how do we talk about pleasure? Which spaces are claimed and by whom? Are safe(r) spaces only dreams of a hidden utopia? To which extent do institutions determine what is sexually allowed/not allowed? And what does all this have to do with care work? In search of answers, UFFICIO DELLA NOTTE presents thirteen artistic positions that are shown in six different art spaces and clubs as well as in public spaces. The exhibition takes place from 23rd September and 15th of October 2022 in Zurich and is combined with walks, a pleasure positive party and a panel on the topic of Sexwork.
Philipp Gufler
Lana Kaiser / Quilt #36 (Der Kreis)

Philipp Guflers artistic practices include silkscreen prints on fabric and mirrors, artist books, performances and video installations. Their short film Lana Kaiser is a touching personal portrait of the singer and entertainer, who disappeared from a cruise ship on her way to New York in 2018. Quilt #36 (Der Kreis) functions here both as a reference for queer history in Zürich and Guflers’ broader research into self-organized archives. The magazine Der Kreis was internationally published from 1943 to 1967. During and for several years after World War II (1939-1945), it was the only homosexual magazine in the world.
at PARAT
Limmatstrasse 204, CH-8005 Zürich
Wed - Sun, 16:00-20:00
Posted by Philippgufler at 12:58
Labels: Der Kreis, Lana Kaiser, Marcel Hörler, neo seefried, Parat, Schweiz, Zürich