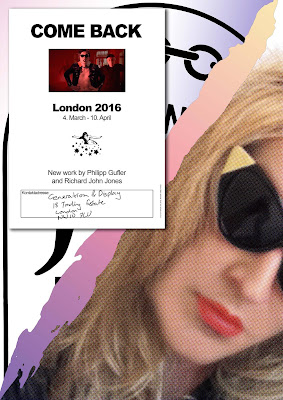 Philipp Gufler & Richard John Jones
The first in a series of 2 person shows at Generation and Display.


I have to erase my memory in order to remember.

The things I never thought I had lost. Which of them have I forgotten? I look at them. In one of them, someone is wearing a shiny red jacket and a kind of stole or wide scarf made of white fur, presumably ermine. There are sinuous rills of dark hair, a splendid beard, a red cap rests jauntily on his head. One hand is elegantly holding a pair of gloves, the other is adorned with several rings, the fingers are stretched out coquettishly.

Someone is wearing a blue dress with a red shawl draped artfully around it. The long blond hair is tied together at the neck. The head is bent, she looks downward. And is wearing large brown wings on her back. Another person next to her in a dark dress with red stockings and boots has one hand resting on the hips; the other is very gently and carefully holding the hand of the larger one and gazing dreamily at her.

One hundred faces are peeled off like masks to reveal the one concealed behind. Everything that happens is merely snatched. Lost in memory, it evades every rule and form of control.

Just as I got close enough to stretch out my hand to greet them, they turn their backs and walk away.