Philipp Gufler
I Wanna Give You Devotion 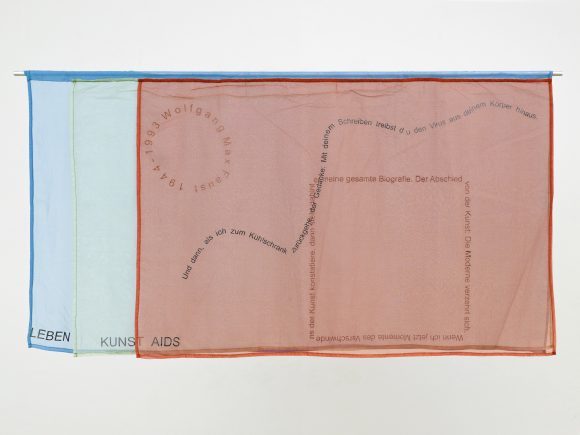 
Philipp Gufler
I Wanna Give You Devotion

“Jäcki does not want to be an intruder at the archive.
– To empathize with everything, not just to do research.
– Can I stay until I have lived through all of it as well?“
(From: Philipp Gufler. Indirect Contact. BQ Berlin: 2017)

In April 1999, a collective of lesbians and gays with a passion for history founded the self-organized archive forum homosexualität münchen e.V. Ever since the members have been working to promote and collect current cultural and scientific contributions and findings on the everyday life, culture and history of lesbians, gays, transsexuals and bisexuals to make them accessible for further research, but also for a wider public.

Philipp Gufler has been a member of the archive since 2013. He created the video installation and artist book Projektionen auf die Krise (Gauweilereien in München) in 2014, in which he deals with the measures of the 1980s Bavarian state government regarding AIDS.

In 2017 in Munich Gufler created the installation and the eponymous book I Wanna Give You Devotion. He invited 29 artists and collectives to question, expand and update the poster collection of the forum homosexualität münchen e.V. These new posters were exhibited along with historical posters from the collection, creating a dense network of contemporary and historical material.

The artist continued to produce works evolving from his research in the forum homosexualität münchen e.V., such as the silkscreen series Quilt or the temporary bar Bei Cosy, created in collaboration with Richard John Jones at Rongwrong, in Amsterdam in 2017.

During I Wanna Give you Devotion, Gufler will read from his artist book Indirect Contact (2017, German title: Indirekte Berührung). Moreover, a conversation between him and Léon Kruijswijk (curatorial fellow, KW) will provide a deeper insight into Gufler´s artistic research.

The event is organized in collaboration with BQ, Berlin. On 28 February at 20h, Gufler’s work Projektion auf die Krise (Gauweilereien in München) will be screened in the framework of the solo exhibition King Louis II in BQ’s project space QBBQ’s in the Rosa-Luxemburg-Strasse 15, which is on show until 16 March 2019.
Posted by Philippgufler at 12:33 Keine Kommentare:
Labels: archive, Berlin, Forum Homosexualität München e.V., Gespräch, I wanna give you devotion, Kunst-Werke, KW, Quilts, Talk 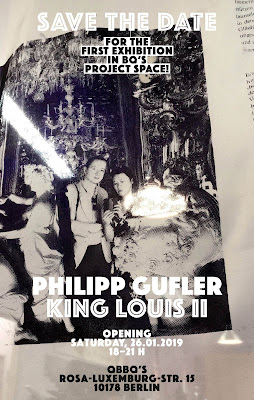 
Dramatis Personae
Ludwig II: the last Bavarian King; heavily in debt
Prince Paul: Ludwig’s aide-de-camp, and lover
Rabe Perplexum: an artist; wearing feathers
Peter Gauweiler: an angry, fearful man
Ben d'Armagnac: an artist; standing inside a large glass box
David: a statue, who has no lines; is only fallen in love with
Louis: a cat

Setting
A neighborhood bar, a quiet place you eventually forget the name of, as your first visit recedes in your memory, indistinguishable from the hundreds of times you've returned, drank, and drank to forget more than just the name of the bar. Lined with floor-to-ceiling mirrors in ornate gilt frames, the tight space doesn't let you stray far from your own image. As you walk behind the row of bar stools with their patrons, there you are in the glass, looking over your own shoulder. Sometimes there are film screenings in the basement, the only time that the familiar scene is interrupted, when the regulars are again reminded of the name of the place: "Is this Reflections?" the newcomers ask as they enter the doorway, their skeptical expressions doubled in the mirror. Before anyone answers (and no one ever does) you've already entered, as if you've always known that this was the place. There's no sign on the front, but you can always find Reflections if you really need to.

The stage is empty except for Ludwig the King. He lingers over a glass, perhaps designing another extravagant castle in his imagination, or working out the details of his still unfinished Herrenchiemsee Palace. After bankrupting the royal purse and the monarchy tout court, he was declared insane and deposed by his ministers. Now an emigré living in a little German enclave in Chicago, he goes by Louis, but most of the regulars at the bar call him Lou. No wonder he recognizes himself more in the face of the cat, with whom he shares the feeling of being somehow irreconcilably different from his fellow drinkers, than in the reflection in the mirror.

Across the surface of these mirrors gauzy images transpire. Something familiar is queerly figured, a spectral face blending with our own. A bit like magic, we see other lives which rendered ours visible, and through our life something of theirs appears. In this little bar we see a distant transfer of Louis XIV’s Hall of Mirrors at Versailles, or Ludwig II's copy of it at Herrenchiemsee. The light of the sun reflected off the moon shimmering at the bottom of a glass; a Louis, a Ludwig, a Lou. Don’t think of it as a decline, but a transference of desires no less urgent or refined. Perhaps this bar is just as much a fantasy as the castle of Linderhof. Reflections is a real place, but you've never been there; I used to go there, but now I can't remember. 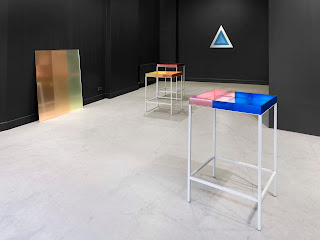 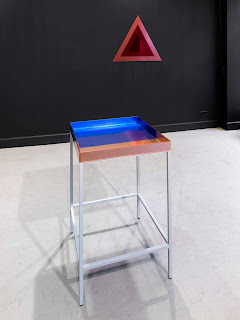 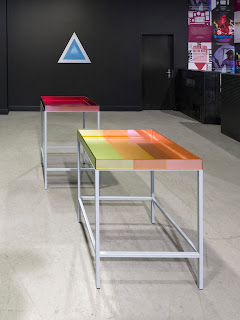 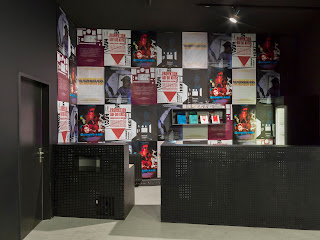 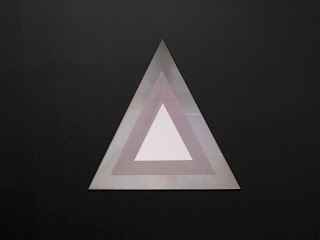 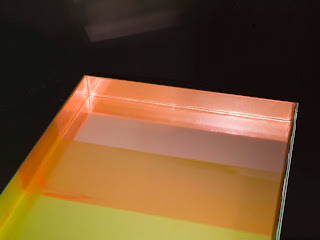